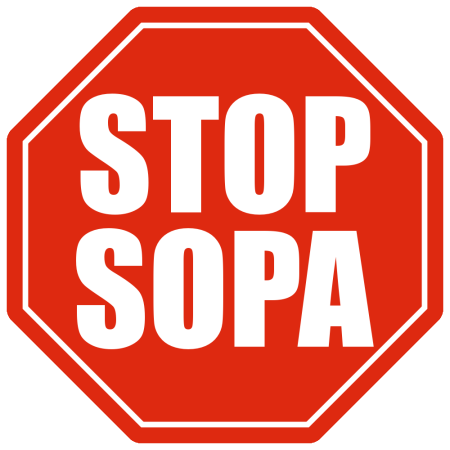 Since this weblog uses an international (read: American) .com extension, but also because of personal indignation, I felt the need to join the global outcry against the SOPA (Stop Online Piracy Act) and PIPA (Protect IP Act) bills that are currently up for approval in the United States Congress.

These bills are bad news for freedom of expression and even the safety of the internet. Here’s a great video to easily break it down for you:

There have been a lot of protests already. Several big names like Wikipedia, Google, Yahoo, Twitter, Amazon, Mozilla, WordPress and others have either joined the chorus of protesters or pledged their support.

If the SOPA and PIPA bills were to be passed, it could mean the end of the free internet we know and love today. These bills were drafted to protect the interests of the entertainment industry (well… basically the old movie and music industries) and make it easier to curb piracy of movies, clips, texts, games. Basically anything we watch, read, play or listen to online.

While I’m all for the protection of intellectual property, these bills completely miss the mark because they allow potentially any site to be blocked if “illegal” content was in any way linked to it. For example, this site could be blocked because I use certain images or embedded clips from well known movies or games.

Also, if someone were to post a reply to one of my articles that includes a link to a copyrighted video, my site could be blacklisted without due process, even though I didn’t post the link myself.

If I had a Dutch .nl extension I wouldn’t have to worry, but I think the threat these bills pose transcend national borders. Also, if SOPA/PIPA were to be passed, it could give techno-illiterate politicians in the Netherlands some bright ideas as well. Not on my watch.

Update1: The SOPA bill didn’t make it past the US congress, PIPA went the same way. The vested interests behind these bills however, are not dead. You might even say that some media giants continue to use their leverage and lobbying power to realise -in whole or in part- what these bills were supposed to achieve.

An example would be Youtube creators having to be very careful about including copyrighted music in their videos or using any other footage than what was shown in the trailer when discussing movies. They might get demonitized or have their videos pulled from the platform. It might seem like a small thing, but it’s just one way to make production/remixing more difficult for content creators.