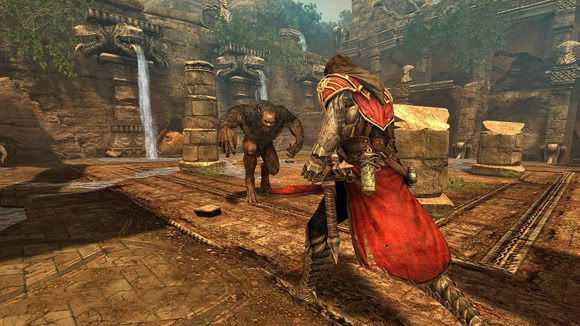 The biggest challenge for the team creating the new Castlevania title Lords of Shadow was not to feel held back by the 26 years of history behind the series. That’s what Dave Cox, producer of the game, said during our interview at Gamescom 2010 in Cologne.

According to Cox, the new title is meant to bring Castlevania back to the mainstream and to appeal to a western audience. Main character Gabriel Belmont, therefore, looks more tough and masculine than the effeminate protagonists of the last few Castlevania games. “We basically tried to go back to the roots of the series”, the Konami veteran said.

It was clear to Cox that the new game had to be a 3D-title. “If you want to biggest possible audience for your game, it needs to be in 3D. If we had stuck to 2D, Castlevania would have become a niche franchise. And you don’t want that for a series that has been around for so long.”

One problem though: earlier attempts to upgrade the series to 3D generated very mixed responses. The two 3D Nintendo 64 games which were released in 1999 are not generally regarded as the best in the series. “I think back then the creators tried too much to replicate the 2D experience and fit it into a 3D world, which didn’t really work”, Cox explained.

Reinvention of the series

The new version, to be released in October on Xbox 360 and PS3, is a complete re-invention of the series. Although trademark enemies like skeletons, zombies, werewolves and other horror-story characters return, the background story doesn’t even speak of Dracula, who has always been the main villain in the series. Instead the story tells of the alliance between Earth and the Heavens being threatened by the mysterious Lords of Shadow.

Main character Gabriel Belmont has a familiar last name, but so far no family connection with famous vampire-hunting Belmont characters like Simon or Richter has been officially established. Gabriel shares their love for wielding a deadly whip though. Asked whether or not Dracula is present in the game at all, Cox responded that he “wouldn’t want to spoil anything about the story.”

The gameplay naturally makes use of the added dimension and the way combat unfolds is somewhat reminiscent to the God of War series. According to Cox however, the combat is basically a return to the beginning of the franchise. “The early Castlevanias were about a guy whipping creatures of the night, and that’s what this game is about as well. Except, of course, that now the enemies come from all sides and the whip can be used in a multitude of ways.”

Notable is the return of the 360 degree whip flail from Super Castlevania IV on the SNES, though altered to fit the new combat system. Secondary items are back as well, such as the famous daggers and holy water. Players can give these items either a light or a dark property, changing their function to serve either offensive or defensive purposes.

Castlevania: Lords of Shadow is being developed by Spanish-based MercurySteam, with Dave Cox acting as an ‘overseer’ of sorts. Konami-icon and Metal Gear Solid creator Hideo Kojima gave the team some creative pointers, but he might as well have been sent to Spain to check whether the team was treating the Castlevania-series with enough respect.

“There was lots of skepticism from Japan at first”, Cox admitted. “Castlevania is a precious brand for Konami and the people from the main office in Japan wondered if we could do a well enough job. In the end they helped us out in a variety of ways, such as motion capture and facial animations.”

The producer also noticed significant changes in the way Japanese and Westerners approach level design. “The Japanese focus on one level at the time, polishing and testing it until they feel its perfect. Only then will they move on to the next level. Western developers tend to design levels mostly all at once.”

Castlevania: Lords of Shadow will probably take 20 hours to complete, which is quite long for an action game. Additional downloadable content will add several more hours to the clock, however. Dave Cox said the DLC will take players to places that they have seen in the main game, but couldn’t previously get to.

More than 70 people have been working on the title over the past two and a half years. Castlevania includes an orchestral soundtrack and features the voice acting of Robert Carlyle (Trainspotting, SGU Stargate Universe) as Gabriel and Patrick Stewart (Stark Trek, X-Men) as Gabriel’s mentor Zobek. Stewart in his role as Zobek also acts as the game’s narrator.